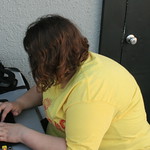 Tonight I went to the rusty needle in Hutchinson Kansas and partook in a 3 band show, signature sound entertainment was presenting. The show was being headlined by Elysium

The first band was rivalries aside, was fronted by colton gartleman formerly of victims of spotlight. The band played a mix of rock n roll and some lighter metal music. The band sounded polished not sure how long they had been together but sounded slick. The band played a good mix of up tempo and hard rock sounding music.

The second band was humanity ai, compilation of several bands from around the area, fronted by Sean Story and these guys kicked some major tail, enjoyed listening to their music. The band had a mix of metal and hard rock music, the crowd was definitely here for them, when they went on, the patio at the Needle filled up.

Final band rounding out the hat trick of the evening was Elysium. These cats have played the Rusty needle every time they play Kansas. They have began to do their own booking and have taken to have a philosophy of non stop touring. They did s great series of old and new stuff. The band itself is very polished and put together a mix of old material and newer material.

Overall a great night of music at the needle. Other venues in Hutchinson and the surrounding area may copy what the needle is doing. However no wonder the Rusty needle is up for an independent music award in topeka for best live venue, when other bars in the area are booking tired old acts that cant fill a Tuesday evening, the needle is going above and beyond. Next show is Saturday with the popular cover act Piper Leigh and the smoking section.

Dell Will Invest $125 Billion In China Over Next 5 Years

ABOUT US
KJAG Radio is your news, entertainment, music fashion website. We provide you with the latest breaking news and videos straight from the entertainment industry.
Contact us: kjagradio@kjagradio.com
FOLLOW US
© 2020 Transmedia World Wide